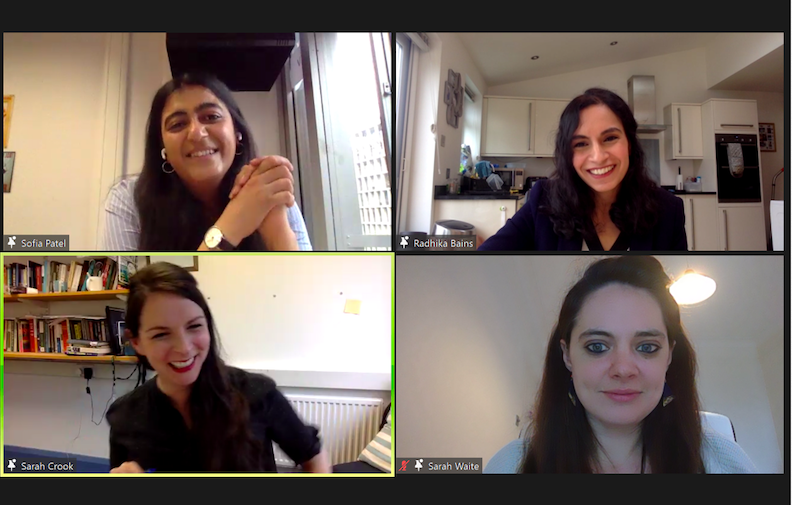 On 10 March the College of Arts and Humanities welcomed three external speakers with extensive public policy and political advice careers to give employability guidance to students interested in political careers.

Organised and chaired by Dr Sarah Crook, Lecturer in History, the roundtable shed light on what an ‘average’ day might be (there’s no such thing!), how the skills developed at undergraduate level are useful to political advisors and researchers, and how to get your foot in the door.

Sofia Patel, Head of Events and Visits for Sir Keir Starmer QC MP, Leader of the Opposition, together with Sarah Waite, founder and Chief Executive of Get Further, who has held an extensive portfolio of roles in the Civil Service and as a political advisor to the Labour Party, and Radhika Bains, who in a previous role worked in Parliament for a Shadow Minister of the Cabinet Office, first set out to explain what motivated their political careers.

All three said their experience at university had been formative, highlighting areas of inequality that they wanted to proactively address, and introducing them to ideas and ways of approaching issues that laid the groundwork for their later careers. Asked about the highlights of their political careers, the speakers drew upon extraordinary moments, such as shaking hands with President Obama, and including a policy that they had developed in the Party election manifesto, and also the moments that stretched them: the unenviable task of waking up members of the Shadow Cabinet at 6am for an interview on the Today Programme on their first day working in the press office.

The speakers worked to dispel the image of political careers as dependent upon connections or cliques, suggesting that students get involved with local Party branches and stressing that even positions that don’t sound influential can be made interesting – getting your foot in the door is the first step, and that political jobs can be what you make of them.

They suggested that students can learn about the issues shaping politics in lots of ways, including through podcasts, morning newsletters, and political biographies (giving us the inside scoop that all politicians vouch for the lessons derived from Robert Caro’s work on Lyndon Johnson).

All three guests, one of whom did an undergraduate degree in Maths, and two of whom hold degrees in History – championed their degrees as developing vital skills that they brought to bear in politics: Maths helps to break problems down into constituent parts, leading to clear and incisive problem solving; History teaches how to discern and communicate arguments, see the big picture, and digest large quantities of information quickly.

Importantly, they also encouraged students to feel confident in the value and recognition of doing something else before entering politics, allowing students to build up expertise and personal experience in a policy area (which might include teaching before going into education policy, or working in the probation service before going into criminal justice policy).

Neither should students see working for political parties as the only route into politics, as the civil service, charities and think-tanks all offer stimulating and vital routes to support good governance.

The event, which welcomed over 50 students and attracted excellent questions from the audience, was stimulating and inspiring: thank you to Sarah, Sofia and Radhika for their time.

The ‘Careers in Politics’ event led by Dr Sarah Crook, with special guests Radhika Bains, Sarah Waite and Sofia Patel, opened my eyes to the variety of occupations available in British politics. In addition to hearing about these women’s incredible encounters with Barack Obama, Tony Blair, David Cameron and Ed Miliband, it was also useful to know that there are a wide variety of jobs available, from policy change to research, and work in parliamentary procedure and government business.

As a third-year history student, discovering that two of these amazingly successful women had also studied History at university was very interesting. Radhika and Sofia explained how skills picked up in their degree could be applied to a career in politics. Furthermore, it was useful to find out that you don’t need to initially know everything for a career in politics: the speakers said they learned plenty actually on the job rather than through study. This was surprising but extremely encouraging as I do not currently have any experience in the political field.

This talk gave me much more clarity on what a life in politics could look like, as well as providing me with suggestions for opportunities, such as volunteering for local campaigns. These opportunities might allow me to get my foot in the door, should I decide to embark on a career in this field.