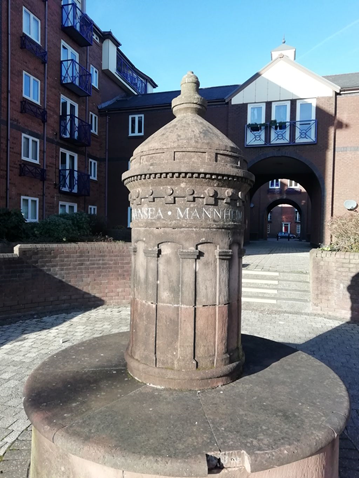 One of Swansea’s least well-known monuments stands in the city’s Maritime Quarter. Formerly the site of the docks that facilitated much of the industrial activity upon which Swansea thrived in the nineteenth century and first half of the twentieth, this quarter was redeveloped into a residential district in the 1970s and 80s. In the part of the Maritime Quarter known as Mannheim Quay stands a 2.6m-high stone sculpture of a tower. A short inscription on the rear of the sculpture indicates that it was unveiled on 9 August 1985. However, the explanatory plaque that was originally installed into the ground, near the base of the sculpture, has at some been point removed. As a result, few today – including both visitors to Swansea and natives of the city alike – are aware of what this monument symbolises and commemorates.

In fact, this sculpture in Swansea’s Maritime Quarter is a miniature replica of the 60m-high Wasserturm (Water Tower), which stands in the city of Mannheim. Mannheim lies in the federal state (Bundesland) of Baden-Württemberg in south-west Germany, one of the sixteen states that make up the modern-day Federal Republic of Germany. The city stands at the meeting point of the Rhein and Neckar rivers. The original Wasserturm occupies a large park (the Friedrichsplatz) in the centre of Mannheim. The tower was built between 1886 and 1889. Destroyed during the WW2, and reconstructed in the 1950s and early 60, the Wasserturm is the city’s chief landmark.

Swansea’s miniature Water Tower owes its existence to the fact that Swansea and Mannheim are partner cities. A practice instituted in the wake of the Second World War, city twinning was a way of promoting peace and reconciliation across Europe. In the 1950s, a particular connection developed between towns and cities in Wales with counterparts in Baden-Württemberg. The first of these partnerships was established in 1955, when Cardiff – Wales’ capital – was twinned with Stuttgart – the capital of Baden-Württemberg. Other agreements followed. Rhondda Cynon Taf, for instance, entered into a partnership with Ravensburg. Pontypool became twinned with Bretten.

The Swansea-Mannheim partnership was established in 1957. It was the first twinning agreement for both cities. While documentation about the inception and early development of the partnership is scarce, the rationale for partnering these two cities became clearer in the ensuing decades, as the partnership developed. As part of the celebrations in 1982 for the twenty-fifth anniversary – the silver jubilee – of the twinning partnership, the two cities issued a joint document affirming one parallel between the two: just as Mannheim was the second-largest city in Baden-Württemberg, so too was Swansea the second-largest in Wales.

The 1982 document also articulates what must have been the most important rationale in 1957. It affirms that both Swansea and Mannheim were ‘seriously affected by the destruction of the Second World War [and] wish to learn from and to help one another through this twinning relationship. They share a common purpose in contribution to reconciliation and friendship between peoples by cementing political, social, cultural and economic links.’ Hence, there were significant parallels in the two cities’ history; both had suffered significant destruction during WW2, and both strove to rebuild and regenerate in the decades that followed.

As part of the silver jubilee celebrations for the city partnership in 1982, Mannheim renamed one its squares as Swanseaplatz or ‘Swansea Square’. As part of the naming ceremony, a plaque bearing a piece of Welsh slate depicting Swansea’s coat of arms was unveiled in the square. The plaque is still there in Swanseaplatz today, though the coat of arms has since vanished.

In 1997, the year in which the two cities celebrated forty years of their partnership, the city council of Mannheim affirmed the importance of town twinning:

After the end of the Second World War the twinning of towns and cities played an important role in bringing about the reconciliation of the people of Europe. The contacts that were made between many individual towns and cities formed the foundations of European cooperation, a cooperation which is based in mutual trust, friendship and understanding. The common goal is the development of a united, free and strong Europe and fulfilment of the conception of European Union, as we move forward into the 21st century.

Exchanges between Swansea and Mannheim

While politicians in both Swansea and Mannheim provided the framework for the twinning agreement, as with any such partnership, it was down to citizens and associations from the two cities to make it work in practice. After what appears to have been a slow start, tangible links between the two cities did start to form. Over the years, an increasing number of exchange visits were carried out between the two cities. Groups of students, sporting clubs, artists, musicians, businesspeople and entrepreneurs all spent time in the respective partner city. One of the most vibrant connections developed between the Swansea Male Voice choir and the Liederhalle Choir of Mannheim. The members of both choirs, along with their spouses and partners, made many exchange visits to take part in joint performances and concerts. Guests would often be accommodated by families in their homes, rather than in hotels.

At least some of those who engaged with the partnership gained experiences and friendships that remained with them long after. In 1978, Mrs Babs Davies of Fforestfach, Swansea – who was one of the first to go on a school visit to Mannheim twenty year earlier, before returning many times thereafter – affirmed that ‘the exchange movement had brought a great deal of happiness to my family.’ In 1982, Mrs Ruby Stock of Treboeth, Swansea, reported on her visit – her first – to Mannheim, which she had made only a few weeks earlier. More than three decades after the end of the Second World War, Mrs Stock had traveled there feeling some anxiety, for Germans ‘had always represented war and fear to me since I was a child’. However, she enjoyed her time in Germany much that after it she wondered at ‘how far away all the fears and apprehensions seem now. The only memories left are ones of warmth, kindness and love.’

Different dimensions of the Swansea-Mannheim city partnership are evidence in the creation of the miniature Water Tower in Swansea’s Maritime Quarter, as well as in the ceremony for its unveiling on 9 August 1985. The ceremony was attended by dignitaries from two cities, led by the Lord Mayor of Swansea, and Gerhard Widder, the Oberbürgermeister of Mannheim (who later became an honorary citizen of Swansea, a distinction shared with only a select few including former US President Jimmy Carter and Prince Charles). Also present were members of the Swansea Male Voice choir and the Liederhalle choir.

At the time of the ceremony, the residential buildings that would comprise Mannheim Quay were yet to be built, and so the miniature Water Tower acted as a kind of symbolic foundation stone of the wider project. During the ceremony’s speeches, a representative of the Swansea Twinning Association affirmed that the decision to name the area Mannheim Quay had been inspired by the christening of Swanseaplatz in Mannheim three years earlier. Glynne Jones, chair of the Swansea Male Voice choir, have a speech in which he affirmed the symbolism of this reciprocal act:

The opening of the Mannheim Quay means that geographically, the name Mannheim is established as part of Swansea city. So, truly, today is a historic occasion, and a vindication of the true value of twinning. With the Mannheim Quay at Swansea, and Swanseaplatz in Mannheim, we have well and truly enhanced our relationship.

He also related that the idea of creating a miniature of Mannheim’s chief landmark in Swansea was the brainchild of Heinz Schmetzer, the chair of the Liederhalle. As the plaque originally installed near the sculpture’s base stated, it was funded by the Liederhalle along with the councils of the two cities. The ceremony of 9 August ended with the two choirs jointly singing the national anthems of Germany and Wales. In short, then, the 1985 monument embodies the cultural ties that exist between Swansea and Mannheim, and symbolises the efforts of both cities to recover and rebuild from the devastation of the Second World War.