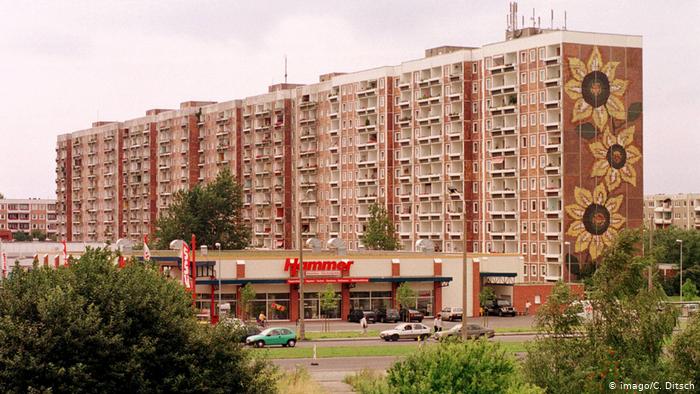 On 20 May 2021, a vigil for a young man who had recently died turned into an hours-long riot in Mayhill, Swansea. The widespread shock and dismay that followed showed both a determination to do something about their causes and to punish the offenders. There were arguments over the perpetrators deserved help or condemnation. Whether the riots will be remembered as a product of social inequality or as a moment of anti-social behaviour remains to be seen.

Sometimes there can be efforts not to remember at all. When riots are followed by denial and silence toxic legacies can be created. Nowhere is this truer than in Rostock, the largest city in the Bundesland of Mecklenburg-Vorpommern in North-East Germany. There, on 22- 24 August 1992, a series of race riots took place connected to the increased immigration in the reunified Germany.

The riots themselves were centred around the Sonnenblumenhaus, a refugee and asylum seeker shelter in Lichtenhagen, about a 20-minute train journey from the city centre. Here, several hundred right-wing extremists descended on the city, intent on causing damage and protesting against rising immigration caused by the need for a larger workforce in the East. Patrick Ireland puts it best by highlighting the fact that this policy, which had originated in the GDR, actually added fuel to the fire, and tensions came to a head in this powder keg.[1] Frustrations boiled over and became violent. The Sonnenblumenhaus, housing Vietnamese workers, was petrol bombed.

The issue that arose, and which piqued the interest of historians and journalists alike, was two-fold. Firstly, the residents came out in support of the rioters and applauded their actions, with chants of ‘Germany for the Germans’.[2] Secondly, the lack of police actions and refusal to intervene when the riots first began, mean that they went on longer than necessary and painted the picture that Rostock, as a city, was inherently racist.

This legacy, and the refusal to act at the moment, has meant that this piece of history and heritage in Rostock has become toxic. Many people only know of Rostock because of the riots, and not for the area’s outstanding natural beauty, its sports culture or its history as a port town. Yet there is a silence around the riots, perpetuated by the city’s residents. I experienced this first-hand during my time in Rostock. As this was the subject for my undergraduate dissertation, I asked my colleagues on several occasions for information regarding the riots and their feelings at the time, but getting any response was difficult and very few people agreed to discuss it.

In terms of heritage, Rostock has some experience with remediation of tragic events. In the centre of the city, there is a large monument to the victims of the Holocaust, that serves as a reminder for Germany’s National Socialist past and harkens back to the GDR’s strong stance on collaborators. The success of this monument contrasts with efforts to memorialize the riots. The artist collective SCHAUM created a set of sculptures to do this. The aim was to create a discussion point with the artwork, but this has not exactly been successful. The sculptures are extremely vague and, without prior knowledge of the installations, it is unlikely that one would know what it was.

So how does Swansea avoid the same fate? While not as life-threatening or on the same scale of international shock as Rostock, discussion, communication and direct action need to be undertaken in the immediate aftermath in order to fully move on. As happened at Rostock, in the event that no action is taken immediately, issues begin to fester and cause damage to an area’s reputation. The reasons behind the riots in Mayhill needs to be understood and remediation needs to begin in that community in order for residents to feel safe and comfortable, and remove any chance of toxicity taking hold over the area.