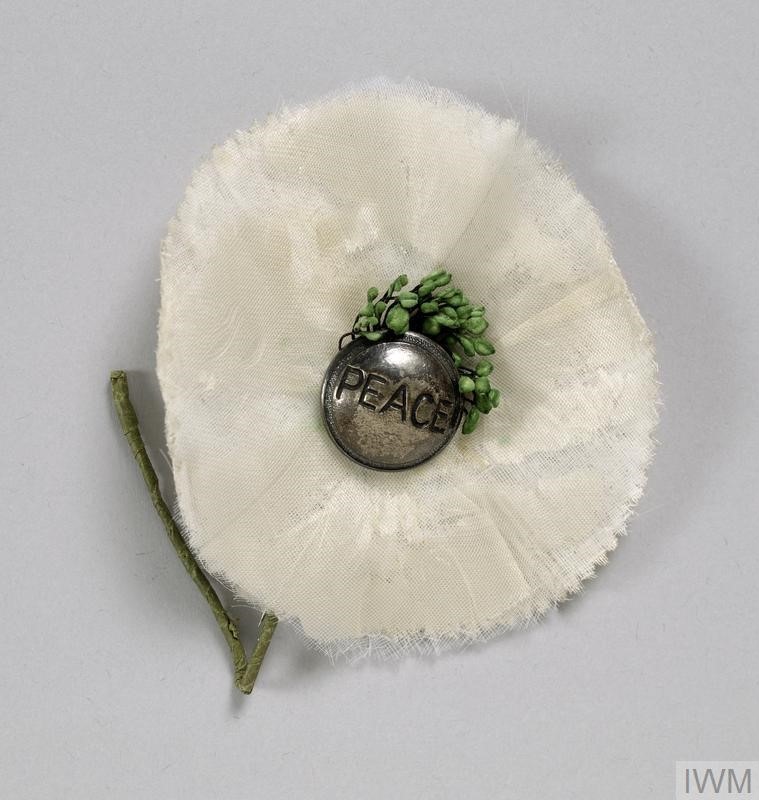 The interwar period brought a wave of cultural change, and the white peace poppy was a fringe commemorative symbol that exemplified these changes. The white peace poppy was organised and sold by the Women’s Cooperative Guild, typically working-class women who had lost multiple family members to the Great War and sought to exercise their newly found democratic rights. Introduced in 1933 and sold from 1934, the white poppy stood on a pacifist platform, propagating the idea that society should actively remember all victims of war, in order to ensure that a total war would not break out again. It is important to note that the concept of the white peace poppy did not seek to overtake, replace, or cause any offence to the Haig Fund in 1933 when it was proposed to be sold alongside the Flanders poppy. However, its mere suggestion, to a militarist culture, was immediately viewed as an ‘insult’ and a challenge. This led to strong opposition and resentment toward the white poppy and the women proposing its distribution. The opposition came from militarist sections of society, as well as from sections of society that dared not offend the establishment that had secured victory in 1918 and soldiers had sacrificed for the war.

These ideas were key to historic roots of my undergraduate thesis, ‘Poppy Fascism: The Symbolism of the White Poppy in Britain’, which sought to explore the function, perception, and principles of the white poppy as a way of comparing interwar attitudes to those of today. Of course, this discourse has become more prominent in recent years through the increased popularity of the whitepoppy and its ideals, and the British Legion’s expansion of the Flanders poppy’s values and symbolism. However, the historical schism created in the 1930s has a variety of elements that are worth interrogating.

‘Poppy fascism’ is a purposely provocative term, and a concept that has arisen through a variety of populist attention the last 15 years. Originally coined by Channel 4 journalist Jon Snow in 2006, the phrase refers to the intolerance and hostility that arises when members of society, usually in the public eye, do not engage with the prescribed Armistice process by wearing a Flanders Poppy. This process that has become defined by its moral obligation to outwardly express gratitude and honour the fallen soldiers of the Great War. However, the discourse Jon Snow described in 2006 was not a new phenomenon. It had pertinent ties to the type of attitudes first displayed in the 1930s, when the white poppy had first been proposed. These are the type of threads that my dissertations sought to pull on.

The Flanders poppy first became entrenched in British society by its association to post-First World War state commemorative processes, such as the procession at the Whitehall Cenotaph. While most of today’s society is empathetic to the individuality of mourning and remembrance, focus on the engagement with the Flanders poppy has remained in view. Many modern popular expressions of remembrance have a passive tone, yet strongly link the poppy to soldiering and war enforcing the ideals of early 20th century militarism. This perhaps demonstrates the monopoly of the Flanders poppy in First World War commemoration.  Moreover, a renewed wave of nationalism in Britain, has seen society reaffirm the role of the Flanders poppy, not least because of the centenary of the Great War – which has pushed ideas of remembrance and war to the fore once again.

The first element of the white poppy I looked at was its primary function as a commemorative device. The cultural disconnect created between the British Legion’s Flanders poppy and white peace poppy presented a new style of commemoration, one that carried an explicit political message. Throughout this chapter I sought to illustrate a variety of features that affected this change, by primarily assessing the core beliefs of the organisations involved – the British Legion, the Peace Pledge Union and Women’s Cooperative Guild, and how this represented a change from militarist memorialisation to pacifist commemoration. The white poppy became the antithesis to the British Legion’s symbol. It lacked the blood-soaked imagery, had no apparent direct links to soldiers, or soldiering culture, but promoted pacifist message on behalf of the women who lost so much. In 1933, Eleanor Barton, General Secretary of the Women’ Cooperative Guild had clarified the white poppy’s position, highlighting that ‘for a long time our women have been feeling we ought to do something to show our desire for peace’, but in now way were they ‘opposed to the British Legion’, or Flanders poppy.

At another level, the presence of another image framed the white poppy as an almost pseudo-iconoclastic image and movement. Some rejected the input of a women’s organisation on a male dominated subject such as war remembrance, while others dismissed the image as a sign of cowardice or effeminacy. The overarching outcome of this point was the transient nature of interwar commemorative process. Methods of remembering the past and the assignment of value were fundamentally changing, and with many adopting an allegoric and somber tone. Equally, we can see how interwar society lacked the cultural freedom to facilitate dignified remembrance or mourning with any level of individuality. As a result, when compared to the white poppy, the Flanders poppy represented an interwar process of collective memory that was top-down and prescribed.

The second area of study was illustrating early twentieth century attitudes to conflict and gender. I looked at how any aversion to conflict and war was viewed as effeminate and unmanly, and how this affected the perception of the white poppy. The process of discussing resistance to war was two-fold, through conscientious objection and shell shock. The impact of conscientious objection was crucial to shaping my research. The PPU, an organisation that the white poppy was aligned with, actively encouraged conscientious objection, and quickly became a symbol that the rejected war. By presenting this, I sought to show the parallels of criticism between non-combatants and the reception of white poppy to which there was a clear link. In many ways, the white poppy subverted the traditional ideas of commemoration; it discredited the grandeur of the victor through abstinence, which undermined the militarist elite in Britain. This illustrated perfectly the cultural effects of the political sentiment that had arisen during the period.

The final area of exploration was concerned with gender politics; the dissertation sought to understand the ways in which the newly politicised women of the era exercised their new-found agency. The most interesting finding here was the role of motherhood in viewing women of the period. By engaging in international affairs and influencing foreign policy and pacifism, motherhood became a tool that women exercised in their new politicised nature, citing their loss as a way of validating their views on foreign policy and the pursuit of pacifism. In 1938, Cardiff’s Temple of Peace was opened by mothers of soldiers from regions across the country, all of whom advocated peace as a way of protecting the sacrifice of their loved ones –a pillar of the white poppy, highlighting the interconnectivity of the white poppy with inter-war themes. One mother, Minnie James, became a spearhead of the opening ceremony; from Merthyr Tydfil, James was characterised as ‘Wales’ most bereaved mother’ after losing three of her sons to the war. She gave a speech which culminated by viewing the Temple of Peace as ‘a symbol of our determination to strive for justice and peace in the future’. A sentiment that was not dissimilar from the members of the Women’s Cooperative Guild and their view of the white poppy. This was also exemplary of the type of parallels I interrogated.

Collectively, these ideas provide key comment on the white poppy’s impact on the commemorative process and society in general both passively and actively. Further still, we can see how people associated moral values to the process of remembrance, creating a dynamic that considers the duality of the white poppy within its society, the same way in which modern demonstrations use commemorative sites as vehicles of memory. However, it is likely that the white poppy will maintain its outsider status in history and society and modern discourse toward remembering the Great War will endure. I hope to have outlined some historical significance to a timeless symbol, and perhaps highlight how fringe concepts, like a white peace poppy, can alter how we view of commemorative symbols and produce a divergent use of symbols from the past.

(Twitter: @benyarrow2) Ben is an MA History student, and this blog outlines the research carried out for his undergraduate dissertation. Beyond MA study, Ben is looking to continue studying the interwar period through a PhD or archival work.